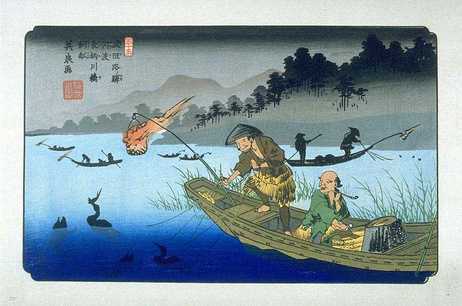 It's very unlikely that world birders will flock to Gifu City. There are no wintering cranes, no sea eagles feeding on moving ice, no fish owls at a minshuku pond.  However, it is a great place for resident and visiting birders who want a challenging day or long weekend out to find their own birds.  Gifu City is right in the centre of Japan and is easily reached by JR and Meitetsu trains from Nagoya.

The city covers an area of about 203 square km (78 square miles).  Its geographical centre is Nagara Bridge, which is situated about 52 km from the sea.  Gulls are rare, and I have only managed to find a few Vega and Black-headed Gulls. The only record of a Common Gull was of a single bird in 1918!

The highest mountain is Dodogamine at 417 m (1370 ft) and other mountains range between 200 and 330 m in height (the second highest is Kinkazan, with Gifu Castle at its peak).  Spectacular views can be had from the top of Dodogamine and Kinkazan, where on a clear day you can see Ontake, Norikura, Ena-san and—to the west—Ibukiyama, 'where eagles dare'.

The jewel in the crown is Nagaragawa Fureai no Mori, with Matsuoike in the southwest and a very good campsite in the northwest with an onsen and a temple serving tofu dengaku teishoku lunch.

Further west is Bangaike, next to Gifu University, and to the southwest the Nagara River is joined by the Sakai River, with many rice fields between.

The Gifu City bird list now stands at 248 species, which is quite remarkable for a small inland city and compares favourably with much bigger Nagoya, which has the sea and tidal rivers.

Bicycles are the most convenient way to reach the best birding sites.  Visiting birders can easily rent a bike at Gifu Koen below Kinkazan or perhaps carry their own folding bike.  From dawn to dusk you could clock up anywhere between 60 and 80 km cycling around.  I do all of my local birding by bike and keep monthly lists. On three occasions I have found 70 species in a day, while 74 plus 3 'heard only' birds is my best day total. 2015, an El Niño year, gave me my best year total of 159 species. (Each year there is an average of 18 species seen by other observers but missed by me.)  There is good spring and autumn migration throughout the city. The peak month is April, with a high of 106 species, but in July the total drops down to just 40 plus.

In winter, up to 15 species of duck can be found in a day, including American Wigeon, Baikal Teal and Common Goldeneye, along with a flock of Mandarin Duck at Matsuoike.

Some winter rarities are occasionally met with near the top of Dodogamine, and in December 2014 and January 2015, small flocks of Asian Rosy Finches and Pallas's Rosefinches were present along with a single Common Redpoll.  Copper Pheasant is rarely encountered, but I once had a view of a male drumming in the sunrise to attract a female nearby who was climbing an almost vertical slope!

In Fureai no mori, there is an open log hut near a pond where you could overnight in a sleeping bag—an ideal place if you want an early-dawn attempt for the birds.

Around Golden Week (the first week of May and a national holiday period), two or three pairs of Japanese Paradise Flycatchers arrive to breed in the lower woods—with their accompanying band of admiring photographers! Other springtime beauties include Japanese Robin, Siberian Blue Robin, Narcissus Flycatcher and Blue-and-white Flycatcher.

Most years, a pair of Peregrine Falcon raise two or three chicks on the craggy precipice below Gifu Castle—a real spectacle!

In spring and autumn, hundreds of Crested Honey Buzzards, Japanese Sparrowhawks and Grey-faced Buzzards pass over the hawk-watch point on Suidoyama above the Kinkazan Driveway.  There is also a good passage of waders along the rivers and through the rice fields, including Pacific Golden Plover, Whimbrel, Spotted Redshank and Marsh Sandpiper.

A very good place I recommend to stay is Hotel Ishikin, with its own onsen, centrally placed right next to Nagara Bridge. In March 2013 on three consecutive nights, I watched a Long-eared Owl using a post just outside this hotel while circling around catching bats.  In winter you can observe up to 20 Common Mergansers fishing in the river just in front of the hotel.

Good birding to all.