On the first day of January I went to Kasaoka, just inside Okayama Prefecture. It was my first visit to the area. I had wanted to go for a long time, but seldom venture to eastern Hiroshima or Okayama. This reclaimed mudflat is now largely farmland with some ponds, dykes and grassland. It is surrounded by low deciduous hills. On the only large pond I found a Slavonian Grebe among the 30+ Black-necked Grebe, 30+ Little Grebe and 10+ Great Crested Grebe. They are a very scarce visitor to western Japan. Then as I searched through the 2000 or so Greater Scaup (a big count for this part of Japan) I began to pick out some scarce wildfowl, the highlights being a male American Wigeon and about 20 Smew (though only 2 males). There were also 300+ Eurasian Wigeon, 100+ Mallard, 50+ Eurasian Teal, 50+ Spot-billed Ducks, 30 + Northern Pintail, 20+ Falcated Duck, 20+ Gadwall, 30+ Northern Shoveler, several Tufted Duck and Common Pochard, and 2-3 Eurasian Coot. Out in the bay there were more Black-necked Grebe, Great Crested Grebe and 2 Red-breasted Merganser. After about an hour I started to search the fields and dykes for passerines, raptors and waders. I found a Green Sandpiper, a scarce winterer in western Japan, as well as 10 or so Northern Lapwing ( a low number). There were plenty of the usual passerines: Meadow Bunting, Daurian Redstart, Brown-eared Bulbul, Japanese Skylark, Dusky Thrush, Pale Thrush and Buff-bellied Pipit. As I wandered along, I found another flock of 20 female or eclipse Smew feeding on one of the larger dykes. There were also raptors hunting passerines and presumably the small rodents in the grassland areas and along the reedy dykes. I saw 5 Eastern Buzzard, 3 Eastern Marsh Harrier, 1 female Hen Harrier, 2 Eurasian Kestrel , 1 immature male Merlin and 1 Short-eared Owl, all hunting in a relatively small area as dusk closed in. Apparently there have been up to 3 Short-eared Owls here this winter. They are also a scarce winterer in western Japan, and are confined to a few extensive grassland areas, along with all the other raptors except for Eastern Buzzard.

On January 3rd, I went to the Saijo/Higashi Hiroshima area, some rice fields and lakes to the east of the city of Hiroshima. There were very few birds in the rice paddies, other than low numbers of Northern Lapwing (5), Common Snipe (3), Brambling (200+).  Russet Sparrow, Rook, Daurian Jackdaw and Grey-headed Lapwing were conspicuous by their absence. A large reservoir known as Minaga Lake, a regular wintering spot for Baikal Teal, produced 34 species, with 14 Smew (7 male, 7 female) and 30+ Falcated Duck, bigger numbers than in previous visits—and not full totals, as only a small portion of the reservoir is now viewable by the public.

While washing my face on the morning of the 4th January I heard and saw 4 Japanese Grosbeaks in trees close to my apartment, in Ushita, a not-so-leafy suburb near Hiroshima station. These were only my second record in four years. Two days later, a White-bellied Green Pigeon, my first for the area, was calling in the early morning. I saw a bird on January 11th near where one had been calling on the 6th.
Other highlights from the low hills of this suburb include my first record of a Northern Goshawk, also on the 11th, and a Red-flanked Bluetail, scarce away from the bigger parks such as Hiroshima Castle, Shukkien Garden or Hijiyama Park. Another highlight was a pair of Long-billed Plovers feeding along the muddy edge of the small Ushita River; they rarely stray from the main Otagawa River. Their numbers and those of most ducks have been much lower this winter, while Chinese Penduline Tits have been largely absent, with only one record this winter, in a larger, low reedbed along the Otagawa River drainage in December 2004.

On the 10th of January, I visited the Yahata River, after an erroneous report of a White-billed Diver there. However, I was compensated with Slavonian Grebe, a scarce annual winterer here since 1998; there have been up to four in previous winters. I also saw a Short-eared Owl hunting over the landfill site. This is my first record for here and Hiroshima. It is a very scarce winter visitor. The landfill will soon be dockland, as yet another reclaimed mudflat is sacrificed, while the birds are left with nothing but a useless concrete park. The only other birds of note were 3 Saunders's Gulls, a high count for this site.

On the 12th of January, I visited an egret roost on the upper reaches of the Otagawa River, but failed to find a Ural Owl that had previously wintered. There were 40+ Little Egrets, 10+ Great Egrets and 20+ Black-crowned Night Herons.

No more birding until the 17th of January, when I revisited Minami-Iwakuni in Yamaguchi Prefecture to search the Renkon fields for ducks and waders. The egret numbers were usual, but duck numbers seemed low. I found a dying teal, perhaps pollution-related or from some form of avian flu/botulism. The only birds of note were mostly waders, with an overwintering Marsh Sandpiper (one previous record in November of 4 birds is the only other winter record), 3 Little Ringed Plover, 5 Long-billed Plover, a single Dunlin, 30+ Common Snipe, 4 Green Sandpiper, and one Northern Lapwing, but no sign of the 3 Grey-headed Lapwing (site record) and 2 Wood Sandpiper that had been here in December (first record for December and second winter record) . I heard but could not locate the Red-throated Pipits I had seen in December. This is the second winter that I have seen them here. Outside of Kyushu they are quite a scarce winterer on the main islands. The only other bird of note was a Saunders's Gull. One or two seem to be wintering here, as well as at the Hatsukaichi and the Yahata Rivers. They were a scarce passage migrant until perhaps three or four winters ago.

Short visits to Ushita Yama on two occasions produced a Yellow-throated Bunting and not much else. 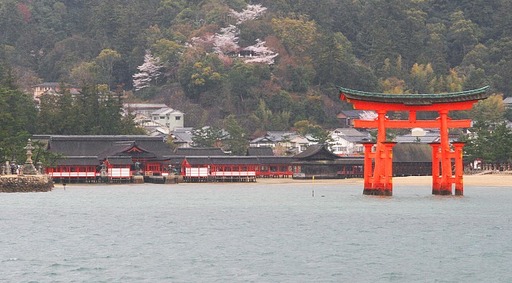 Itsukushima Shrine and torii gate, Miyajima
My final big trip was to Miyajima. Passerine numbers were low near the main ferry port, but once away from there, it became clear that there were large numbers of Grey Bunting, perhaps 30+ in all. Pale Thrush and Red-flanked Bluetail were also in low numbers, with a flyover Eurasian Sparrowhawk and 2 Eastern Buzzards. The only other birds of note were the small flock of 10 Olive-backed Pipit and a single Japanese Green Woodpecker, scarce away from the usual mountain sites.

Hope this helps to give a little flavour of the birding in the Chugoku region.