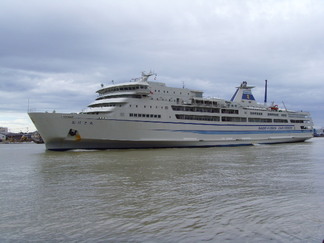 On Golden Week in early May 2012, we went to Sado Island for both cultural and ornithological purposes.  It was a sudden decision and we couldn't find a rental car on the island, so we took our own car across on the Sado–Niigata ferry, which was expensive—35,000 yen return  We arrived at Ryutsu Port at 6 PM Thursday night and left at 9 AM Sunday morning. I think we take the prize for most rain: we had three and a half waking hours without it: from 7 to 9 PM Saturday night (God's grace for the outdoor Noh performance) and from 5 to 6:30 AM on Sunday morning. The rest was a range from drizzle to downpour with occasional thunder and lightning. Species count, a whopping 60. 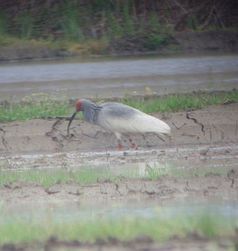 Crested Ibis (C. Harper)
The first took six hours: we didn't find our first ibis until noon Friday.  We found another one on Saturday, and we found two more just an hour before the ferry sailed on Sunday.  All were within 15 km of Ryotsu, in the open rice fields southwest of the city.  The only one that sat still long enough to attempt a digiscope was the last, and I didn't try to creep up on it at all (hence the poor photo).  There is major ricefield development in progress to increase ibis habitat.  Some farmers were still out with their herbicide blowers, though. If you don't read Japanese, don't try to follow signs with ibis on them, since those are liable to lead you to farmer's markets, souvenir shops, libraries, auto dealers, the SDF installation, and just about any other facility on the island: every organization seems to stick them on its signage. It was relatively easy to scan the rice fields, since there were very few distractions.  Throughout our stay, I tallied only 11 Grey Herons, 3 Great Egrets, and 1 Intemediate Egret. Not a single Little Egret!  Shorebirds were also missing; my total was one flock of 30 Pacific Golden Plovers.  And one more surprising lack: we saw no cormorants whatsoever along the island coast.

In search of vagrants, we drove the coast road around the two southern capes of the bifurcated island and poked among the bushes and contorted pines along the way, but came up with nothing at all.  We also went up into the mountains to 1000 m, where it was foggy as well as raining, and dirty snowdrifts still lay along the roadside.  We added some nice birds that I could also have seen much nearer Yokohama:  Japanese Grosbeak, Blue-and-white Flycatcher, Siberian Blue Robin, Eastern Crowned Warbler, Chestnut-cheeked Starling, Eurasian Wren, White's Thrush, Greater Spotted Woodpecker, Oriental Cuckoo. Another curiosity I noticed was that the Large-billed Crows seemed conspicuously small and short-tailed, though Sado is not that far south.
The ferry coming to the island produced only Streaked Shearwaters, perhaps 200 in all.  Coming back to Niigata, the sea was calm but foggy and rainy, with my first experience of lightning at sea—quite a sight. We added a very large flock of Streaked Shearwaters (+500) following a large pod of porpoises, two Pomarine Skuas, two Rhinoceros Auklets, 6 Ancient Murrelets, and one Pacific Loon in breeding plumage.