EASY ACCESS TOKYO LOCATIONS (TOKYO, INNER CHIBA & KANAGAWA)
From time to time we are contacted by birders who are coming to Japan and are seeking birding information. Many are coming to Tokyo on business or other non-birding matters, and have little time to indulge their hobby here and no way of getting out into the countryside. Here is a brief overview of the most easily accessible birding sites within the metropolitan Tokyo area, all of which may be reached within an hour by train. There is no claim to originality or completeness, but it is a place to start if you have only a free day or a few free hours here.

The metropolitan train system is complicated but efficient, and a visitor who remains calm and observant will be able to make his way through the maze. The station names and directions are given in Japanese kanji, Japanese kana, Roman letters, and occasionally in Korean characters, but not all are on every sign: series of signs tend to alternate scripts. Nevertheless, patience in following the arrows and indicators will reward you with success. The basic scheme is that the Yamanote Line is a circular loop surrounding downtown, with major stations Ueno, Tokyo, Shibuya, Shinjuku spread along it, and 25 other stations between them. From the Yamanote Line, other train and subway lines cross or radiate out in all directions. Some you can transfer to without buying a new ticket; others require you to exit one line and re-enter another. (It depends on ownership.) Another important basic is that express trains have red or green characters in their destination panels, while locals are in black-and-white. That should be enough to get you started.

Winter (December to March) is the best birding season, with many winterers from farther north. There are few breeders that are not residents. Migration in the metropolitan area is noticeable primarily as shorebirds along Tokyo Bay; small passerines pass through quickly and quietly and are seldom seen in the city.
1. Meijijingu Koen (Park) is large and right downtown. It contains an important Shinto shrine, sports and recreation facilities, and areas of deep mixed woodland and open parkland, the home most noticeably of Large-billed and Carrion Crows, but also of the most common residents (Great Tit, Japanese White-eye, Oriental Turtle Dove, Brown-eared Bulbul, Grey Starling) and wintering species (Dusky, Brown-headed and Pale Thrushes, Red-flanked Bluetail, Daurian Redstart, Grey Bunting). It is also a place to find Varied Tit in the city, and its ponds sometimes hold a few wintering Mandarin Duck. The most promising pond is at the north end, near Yoyogi Station (Yamanote Line). 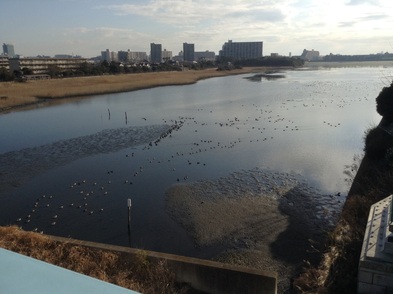 Yatsu-higata at mid-tide (C. Harper)
2. Yatsu Higata is a Ramsar site, and a phenomenon—a mudflat completely enclosed by city. A narrow canal leads out to Tokyo Bay far away, and the tide comes in and out about two hours after the stated Tokyo tides (use the 'Harumi (Tokyo), Tokyo' site on the TIDE CHARTS ). There is also a small freshwater pond, some reedbeds, and a bit of parkland. Yatsu has an English website with tide times and recently-sighted species, YATSUHIGATA, but it is not always current. Yatsu is best near low tide, but if this is your first trip to Japan, there are birds of interest at any time. Best in migration for shorebirds, in most winters it will have a Saunders's Gull among the Black-headed Gulls. You can walk completely around the mudflat, but go at least as far as the Nature House (small admission charge) for exhibits, the day's sightings, a restaurant, and big windows with mounted spotting scopes. It is not visible from the station, but is only a five-minute walk away and easy to find. From Tokyo Station, take the Keiyo Line (Tokyo is the terminal, so you cannot go in the wrong direction) to Minami-Funabashi Station. It is a local station, so either catch a local train at Tokyo Station or change to a local train at Maihama (the Disneyland stop). There is only one exit gate. As you pass out the wickets, a convenience store is in front of you. Turn right and leave the station. Turn right again and take the sidewalk about 100 meters to a pedestrian overpass. Take the overpass (which actually goes under, not over, the elevated freeway) and go down the other side. At the bottom, turn 180 degrees (i.e. walk in the opposite direction from your descent of the steps), cross at the light, and the mudflats begin at that corner, on your left.
3. Oi Bird Park (Oi Yacho Koen) is similar to Yatsu but smaller. It is pleasant and very convenient to downtown Tokyo. Oi is a good place to see Water Rail, which often come out onto the mudflats in front of the visitor center. From Hamamatsucho Station (Yamanote Line), take the Tokyo Monorail to Ryutsu-senta (Ryutsu Center) Station; take the only exit and turn right outside the ticket gate. Walk a few meters to the road and turn right again (in the direction of 'Ota Stadium'). Walk straight— under the monorail track, over the big canal, under the motorway overpass—and then you will find the Oi Yacho Koen entrance gate 300 meters farther on your right. Don't go too late—the gates are locked and Oi becomes inaccessible from 5 p.m. (from 4:30 p.m. in the winter months). The tide comes in and out about one hour after the stated Tokyo tides (use the 'Harumi (Tokyo), Tokyo' site on the TIDE CHARTS ). 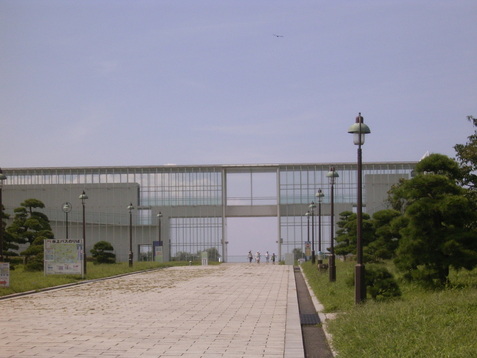 Glass Viewpoint at Kasairinkaikoen (C. Harper)
4. Kasai Rinkai Koen is a multi-use bayside park. It has picnic grounds, concessions and promenades, but also freshwater ponds and two coastal islets. In the winter there are many species of ducks in the pond, and out on the bay, large rafts of Greater Scaup, Eared and Great Crested Grebes. Long-tailed Duck and Smew occasionally appear. One of the islets is accessible and is a good viewing point for the other islet, which is inaccessible and consequently has a good variety of shorebirds and waterbirds in winter and in migration. Rarely, Black-faced Spoonbills overwinter. (For low tide times, use the 'Hunabasi, Tiba' site on the TIDE CHARTS ). After scanning the island (a little distant for binoculars alone, unfortunately), cross the bridge back to the mainland, turn right along the path, and you will soon come to a pond on your left. There are several paths through the scrub beyond it, with hides from which you can view  freshwater areas. Take the Keiyo Line, the same train line as for Yatsu Higata, but get off earlier, at Kasairinkaikoen Station (the 5th stop from Tokyo on the local, and it is a local stop). Walk along the broad paved path toward the large glassed building on the skyline; the two islets will be in view beyond it.
5. Ueno (Shinobazu) Pond in winter is a mass of ducks, and sometimes rarities appear—Lesser Scaup, Baikal Teal, Smew. In summer it is of little or no interest. It is adjacent to the Ueno Zoo, and through the bars you can see a wild colony of Great Cormorants. Ueno Park is nearest Ueno Station on the Yamanote Line, but is more easily reached from the next one, Okachimachi Station, which is much smaller and less confusing. Exit from the north end of the station (the end in the direction of Ueno Station), turn left at the street, right at the next major corner (a very broad avenue) and at the end of the next block you will see a bit of the pond and park on the far left corner, behind a MacDonald's.
6. Mt. Takao is the nearest 'mountain' birding. Although Takao-san is only 600 meters high, you should be able to find Eurasian Jay, Varied Tit, Japanese Green Woodpecker here, and in the winter, buntings. Spring migration may bring you Blue-and-white Flycatcher, Eastern Crowned Warbler, Asian Stubtail. One of our members regularly finds Copper Pheasant here...but he is a very early riser. From Shinjuku Station (Yamanote Line), take the Keio Line or the Keio New Line to Takaosanguchi Station, which is at the base of the mountain. You can take the cable car or walk the numerous trails or both. 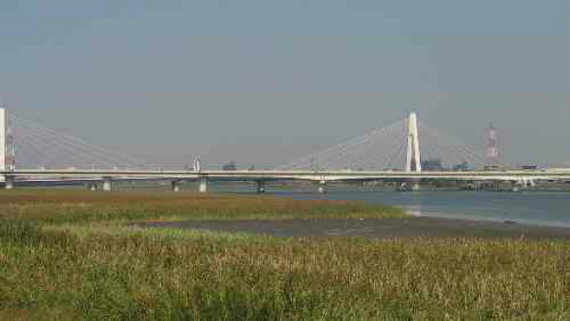 Tama River mouth looking upstream (photo Melody McFarland)
7. Riverine birding is available along the Tamagawa (Tama River). The river mouth, near Kawasaki, is good (best at low tide—use the 'Kawasaki (Siohama Ungo), Kanagawa' site on the TIDE CHARTS )—for shorebirds and terns in migration, Least Terns in summer, and gulls and ducks in winter. Take the Keikin Kyuko Line from Shinagawa Station (Yamanote Line) to Keikyu-Kawasaki Station (to save time, take the Express with green characters). Change inside the station to its branch line, the Daishi Line, by going downstairs. Take this short line to the last station . Walk straight out the station's only exit, past the taxi stand and public toilets, to the cross street and turn left. Walk straight to the end of the road (a few blocks, 5-10 minutes) to its dead end, which is the embankment of the river. Turn right on the path, and bird until it ends at the river mouth.

Birding farther up the river requires a different route from Tokyo. From Shinjuku (Yamanote Line), take either the Keio Line or Keio New Line (as for Mt. Takao) to Seiseki-sakuragaoka Station or the Odakyu Line to Noborito Station. These will take you to near different sections of the Tama River, either of which have lengths of riverbank walking paths. The river is not easy to find, because the stations are enclosed in a maze of small shops. As you travel from Tokyo, however, you will see the broad riverbed when your train passes over the bridge; then, when you exit the station, find yourself a route back in the direction of the bridge and river, and a bit of wandering should deliver you to its banks within 5 or 10 minutes (in extremis, just say, 'Tama-gawa?'—it's phonetic—to a passerby, and they'll point you in the right direction). Residents of interest include Japanese Wagtail, Azure-winged Magpie, and on gravelly islets, Long-billed Plover. Spring brings Oriental Reed Warbler and Zitting Cisticola.