Tobishima, 'Jumping Island', off the Japan Sea coast of northern Honshu, is one of a loose line of offshore islands from Kyushu to Hokkaido which are of particular interest to Japanese birders. They are vagrant traps: in the spring and fall, when mainland migrants stray from the coasts of Korea, China or Russia, these islands are their first landfall. They vary in size from Sado (860 sq. km.) to Hegurajima (1 sq. km.), and most are reachable by ferry in one to three hours, incidentally offering an opportunity for some pelagic birding, though this is not as exciting as off the open Pacific coast.

Sakata, the departure port for Tobishima, is an hour's flight (Shonai Airport) from Tokyo; it is a small city, and the ferry dock is just half an hour from the airport. The ferry trip lasts 90 minutes and the fare is a bit more if you want to sit on the second deck, which you do: you cannot get to the bow, but with a fellow birder and no other wealthy passengers (the local birders huddle below amidships with the smokers and peer over the gunwales), you can work both sides of the boat very nicely. In early May you may still get some of the loons, shearwaters and alcids of this part of the world, and the endemic target, Japanese Murrelet, is usually seen. 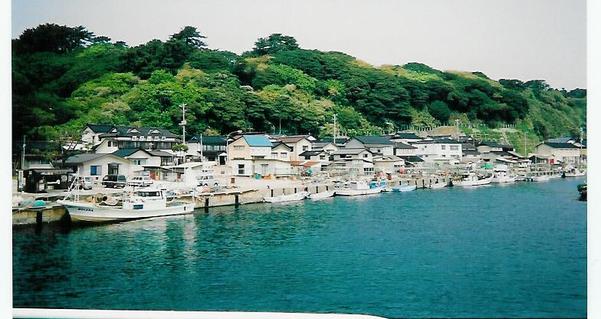 Tobishima Village (C. Harper)
Tobishima, a little over 8 sq. km. in area, consists of a small fishing village of perhaps 100 residents, with a diesel power plant and a couple of small inns (but no shop of any kind) lining the harbour; the central island ridge above the village, along which a 3-km paved road extends, bordered by truck gardens; and the relatively undisturbed rest of the island, with foot trails among mixed mature black pine and deciduous forest featuring some outstandingly beautiful pines, maples and oaks. Two rock islets are breeding grounds for Black-tailed Gulls. 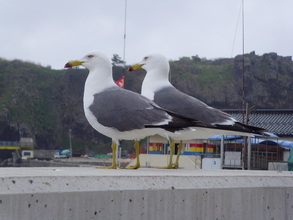 Black-tailed Gulls in breeding finery (C. Harper)
Nagoshi Inn (phone 0234-95-2004, in Japanese only), a few steps from the ferry landing, is very modest by Japanese standards, but it is clean and pleasant, has a nice hot bath and, thank goodness, western-style toilets. Breakfast and dinner are both delicious for those who love seafood. They will make little rice-ball lunches to carry with you in the morning.

The task of the birder is simply to spend the day— in late April to early May from about 4:30 in the morning to 5:30 in the evening—wandering at leisure back and forth along the trunk road and trails looking for the one or two individuals of any of the 200 species that have been recorded on this little island and that may be there at the moment. 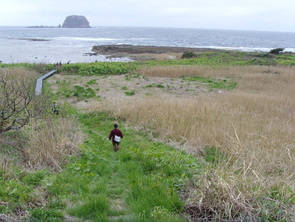 Boardwalk on the deserted side of the island (C. Harper)
There is a tiny dam, collecting rainwater in a tiny ravine, just above Nagoshi Inn, and this is a good starting point at dawn, where a Japanese Night Heron may have spent the night or a Mugimaki Flycatcher has come down to bathe. Then, following the steps on up to the ridge, you meet the sun and one or two fishermen's wives, who have come up to tend their gardens. There seem to be no young people on the island—they have all gone off to seek fame and fortune in Tokyo—only gnarled old men, who have already set off in their boats in the dark before dawn, and their bent, bonneted wives, who either nod a slight greeting or ignore you. In May the new shoots are up and the gardens netted over and festooned with scarecrows. One patch sported a dead, gibbeted Whiskered Auklet, hung as a warning to other Whiskered Auklets who might be tempted to raid the young potato plants. This area you scour carefully for buntings and pipits: some 30 species have been found here. 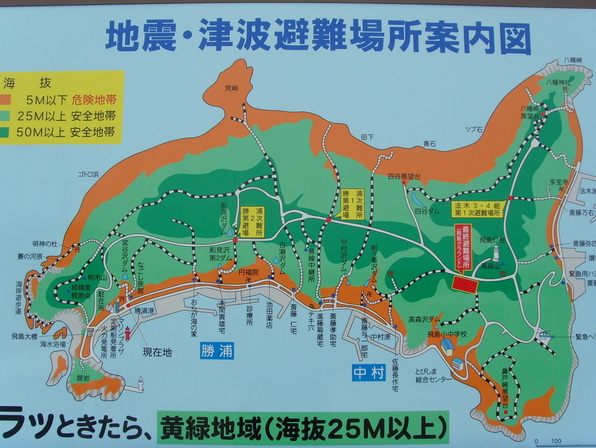 Map of Tobishima (C. Harper)
Returning to the village in the late afternoon, you can look for a short-toed lark or a Japanese Wagtail in the waste lots dockside, study Japanese Cormorants along the breakwater, watch the locals spreading seaweed or filleted squid out to dry on bamboo mats, or spend 30 seconds exploring a Yayoi period burial crevice, the island's lone cultural attraction. If you're just plain tired, go soak in the bath, order two bottles of Kirin with dinner, and go to bed early. There's nothing to do after dark except listen to the Northern Boobooks quietly hoo-hooing from the trees.