Kirada no Mori is a rare treat in Central Japan—old growth forest with 200-300-year-old birch trees. Because of this habitat, the birding can be good all year round. Trails are plentiful and well marked, though the markers can be a little confusing if you have no Japanese ability. Generally, numbers on the trail markers represent minutes to the next destination rather than kilometers (though a '2.5' may represent hours, something that will become apparent if you have been walking for 10 minutes without reaching your destination!). 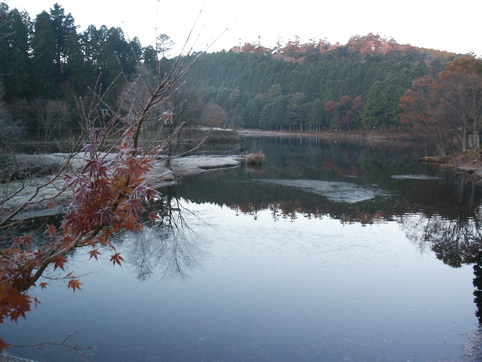 
Getting there: Take Rt. 153 from Nagoya heading towards Toyota. In Asuke-cho, take Rt. 33. In about 22 km you will see a small lake on your right (Danto-ko) with a parking lot with restrooms and a small hut towards the back. The trailhead begins at the back of the lot past the restrooms. The roads may require snow tires or chains during heavy snow. Public transportation inquiries can be made at the Nagoya International Center, (052) 581-5678.

The birding: Though probably not worth traveling across the country to bird, Makinogaike is a nice locale for the birder in town on business with limited time and transportation. Makinogaike is a small lake surrounded by wooded areas, parks, and residential areas. One can pick up 45+ species during a walk around the lake on a good day in late January. It is especially good for wintering ducks (Smew, Falcated Teal) and small and large thrushes (Red-flanked Bluetail, Daurian Redstart, Pale and White's Thrush). Most of the common residents can be found here as well as surprises during migration. 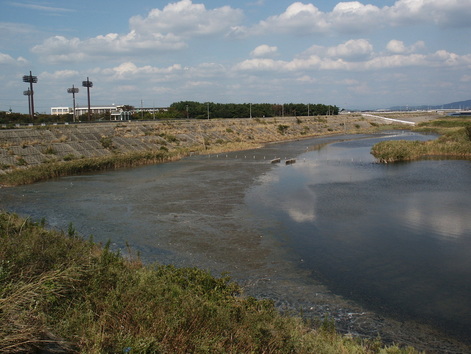 A 'hot spot' along the levee road, good for shorebirds.
The 'hot spot' along the levee road is particularly good at high tide (the sandbars on the bay disappear while the water level here remains relatively unchanged).  There is no single hot spot in Isshiki; it requires driving around to discover active patches. Generally, the best birding is to be found on the western and southern side of Rt. 247. While birding can be good from the levee, there is promising habitat to be found off that road as well. The paddy fields just east of the Yahagigawa (Yahagi River) in Nishio-shi can also be productive. Painted Snipe and Japanese Quail are resident (though far from a sure bet). The latter can be found in the fields just west of where the Yahagifuru-gawa meets Chita Bay.  In and around the pond is always good for ducks, grebes, herons, egrets and possible snipe or Green Sandpiper.  Here is a link to the Google map for the Isshiki area.  There is a webpage by a local birding group (in Japanese). 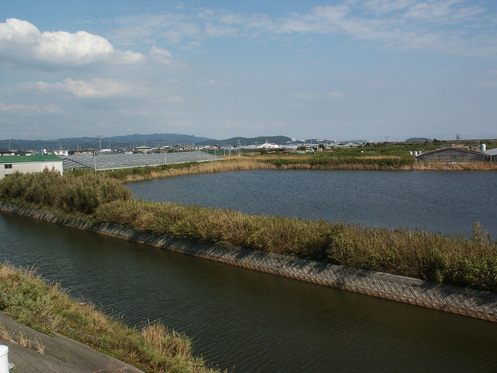 Pond (Mike Yough)
From Toyohashi (i.e. from the direction of Tokyo): Take 23 (westbound) to 247 (westbound). Upon entering the town of Isshiki-cho, you will cross the Yahagifurugawa (Yahagifuru River) Turn left onto the levee road to begin birding from this direction.

Unfortunately, there is no train service to Isshiki-cho. Nagoya, Okazaki, or Toyohashi (three of the larger cities in Aichi) presumably have bus service that can get you there, but the area is quite large and cannot be birded in a day, even with a car.

The birds: Crested Kingfisher is resident. This location is also good for Wryneck during autumn migration, and Long-billed Plover, Mandarin Duck, and various thrushes during the winter, as well as the more common birds year-round.

The birding: This is a relatively easy area to bird because of the relatively small area, the variety of habitats (river, sparse woodland, open field), walking paths, and adequately posted trail maps.  The birding begins in the parking lot. On the opposite side of the parking lot across from the restrooms is a green chain-link fence, and on the other side of this fence is a pond that is good for ducks and Crested Kingfisher. Follow the paths to the river looking for thrushes and the common woodland birds on the way. The river itself is also good for the kingfisher, Long-billed Plover and Mandarin Duck. 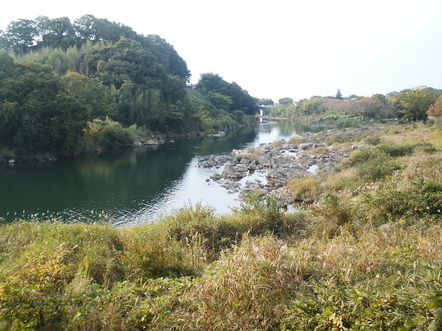 Fujimae is known as Japan's largest stopover site for migratory shorebirds, and was designated a Ramsar Convention Wetland Site in 2002. It is composed of about 300 hectares of tidal flats at the mouths of the Shonai, Shin, and Nikko rivers. It is also a wintering locale for tens of thousands of ducks, and rarities show up annually during migration. One or two Saunders's Gulls can usually be found working the river during winter. The Nagoya City Wild Bird Observatory (9:00-4:30, closed on Mondays) is a good place to make inquiries regarding recent sightings. There is good habitat across from the observatory, though it is rather distant (the observatory is stocked with 30 scopes). Good habitat can be found by following the Shonai River, though the best spots for observation are often along narrow roads with heavy, rapidly-moving traffic. 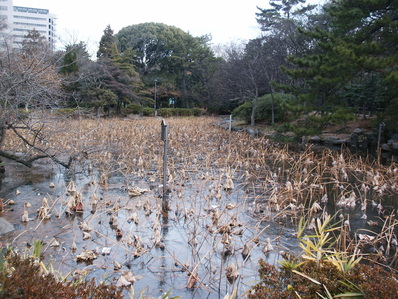 For the visiting birder with limited time and transportation resources, Tsurumai-koen is a good spot to see some of the more common Japanese birds. As a cluster of trees in a concrete jungle, rarities sometimes show up on migration (e.g. Japanese Night Heron). Japanese Green Pigeon is a common migrant and occasionally winters.

Getting there: Take the Tsurumai subway line to Tsurumai Station. Go out Exit 4. The park is just outside the exit on the left.