1) Take images. If the shop owner objects, act ignorant and say at first you think they are pretty/cute and keep on until you have enough images, making sure to get images that include enough to prove the location of the place, and concentrating on species of special conservation concern. Get images of the outside of the shop too, if you can.

2) Get in contact the same day with the local branch of the Wild Bird Society and pass on full details of the shop and the species concerned.

4) If it seems appropriate, ask the police and the WBSJ to mail you to keep you informed of progress in releasing the birds and prosecuting the shop owner.

5) If 2, 3 or 4 above are not feasible for whatever reason, and you have some language skill, tell the shopkeeper as you leave that these are illegally-held species and that you will be informing the authorities—and that you have images as evidence. Then send images and information (address and location) to the WBSJ at your earliest convenience. They can then decide if they have the resources to involve the police.

Generally the police are helpful, but they usually lack the identification skills and often appreciate confirmation of identification and the law relating to wild birds by local organisations specialising in conservation (more than by a visiting foreign birdwatcher).

The same goes for illegally erected nets. Anyone catching wild birds knows it is illegal. If you find what appear to be illegal nets, refrain from removing or destroying them, but take photographic evidence to the police. If you find evidence of nets or illegally caught birds, approach the police with the evidence and get the local bird society chapter involved where at all possible. Don't attempt to dismantle and destroy them yourself.

This trade in wildlife is second only to drug trafficking and involves much the same kind of people - best not to mix with them personally. Definitely take pictures to the police and urge them to act, or to the newspapers, but be careful about getting involved or being seen to be involved personally. Birdlife is precious—and so is yours! Although the actions of bird trappers and the trade in the birds is likely illegal, people engaged regularly in illegal activities have a very different slant on life from the rest of us; they may not even consider life very valuable. Push the responsible authorities to take the necessary action; if they won't, take the pictures to a local newspaper and urge them to run a story—better still, write it yourself. Newspapers provide an excellent means of splashing a topic in the faces of the public; try local radio stations too.

There is one further dimension that might not seem relevant now (esp. to birders in Japan and Taiwan where there is no bird flu), but which might become increasingly so in the future. Caged birds in some regions (Hong Kong, Vietnam, southern China) have shown a high prevalence of HPAI H5N1 infection, as conditions of caged birds and caged bird markets encourage disease development/spread. This should act as a deterrent to so-called owners of such wild birds, but it also adds an extra dimension, in that the release of birds, themselves imported or mixing with imported birds, has the potential to threaten infection of local disease-free wild birds. It is therefore appropriate to recommend testing and to hold threatened species in quarantine before returning them to the wild.

The size and money involved in illegal trade in wild species is now considered to be second only to that of the illegal drug trade. The link between wild species trade and the spread of disease (e.g. SARS, H5N1) has encouraged authorities in many countries to view such illegal trade with increasing seriousness—and to act. They need birder's support to find and report cases of illegal trade.

This is a compilation of advice is  from Nial Moores, Birds Korea, and Mark Brazil, Japan Nature Guides. 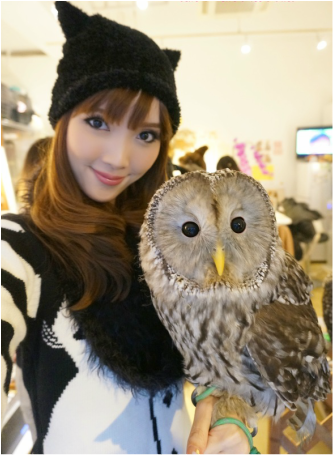 SOME NOTES ON 'OWL CAFES'

Owl cafes have been popular in Japan for about 5 years now. Some of them have been around for a lot longer. There are various kinds, ranging from small family-run cafes that just have a well-loved pet owl in the shop, to large cafes that exploit both native and exotic owls, hawks and eagles, displaying them and breeding them to sell as pets. Owl cafes in the middle of the spectrum, which keep about 10-20 owls for viewing and holding as well as  a handful of owls for breeding and selling are the most common, and have been featured in English media. Google "owl cafe Japan" and you will find articles and photos from both glorifying and critical angles.

I am not certain of the exact legal status of owl cafes in Japan , but in general it is illegal to keep a wild bird as a pet, so the cafes stay within the law by keeping and breeding only imported "pet" owls or by obtaining permits. Anyone can keep a wild bird if they obtain a permit for it. This loophole in the law has always existed and the Wild Bird Society of Japan has been fighting for a long time to get the law changed. It's difficult to change because Japan, like most of Asia, has a long history of keeping birds as pets, and many people think that it is a cultural right.  Caged songbirds are the most common example, but there are other cultural examples unique to Japan . Near my house, there is an elderly man who keeps and trains a small number of skylarks as a hobby. He has been keeping skylarks for more than 50 years. When the sport/hobby was more popular, he used to travel to Tokyo on weekends with his pet skylarks and take part in skylark display competitions, where dozens of skylark owners would send their male skylarks up into the sky and judge the height and duration of the singing displays.  He still does this with his 2 skylarks now, and even for a bird lover like me, it is magical to see the dedication and affection he puts into looking after the birds, which he raises from eggs taken from skylark nests. There are many such cultural customs in Japan involving keeping wild birds, and the Wild Bird Society is ever so slowly winning the battle to have each exception to the law changed.

So ethics aside, as long as owl and hawk breeders don't admit to keeping birds caught in the wild, they are operating within the law. Authorities have no way of knowing where the young owls were bought, and in general the police, who probably wouldn't know an owl from a crow anyway, are not really interested. Owls and hawks are worth a lot of money, though; birds are sold for 2000-4000 dollars each in shops and online, so a poacher raiding five nests a year for 2 chicks each can make an easy buck by selling them to breeders. In my local area, I have seen both Ural Owl and Northern Goshawk chicks mysteriously disappear from nests, and I have no doubt at all that they were taken to be sold on the black market. (This is the main reason why the Wild Bird Society opposes photographing and disclosing nesting bird locations.) So owl cafes operate within the law, but it is obvious they are feeding a larger problem.

In London , a recent attempt to open an owl cafe was aborted after protests that quickly gained momentum, so there is no question that the practice is seen as cruel from a Western perspective. Most Japanese do not see it as inhumane, though. I have seen Japanese blogs and forums where overseas articles expressing anger over "cruel Japanese owl cafes" have been displayed and translated into Japanese, and the general response is one of bewilderment and of picking on Japan . Most Japanese people do not understand why Westerners think it is unethical; they just think the owl cafes are cute. This attitude will be hard to change.

Currently there is an ongoing controversy over a pachinko parlour (slot-machine casino) in Hokkaido that displays a handful of live owls at the entrance 24 hours a day. This case has received a lot of online exposure, and even some mainstream media coverage stemming from a popular online petition to have the owls freed. The change.org petition got 35,000 signatures. This petition originated here in Japan , and I am hoping that the debate it has started will lead to discussion about the ethicality of owl cafes.

Hope this gives a bit of an overview into the situation here in Japan . I didn't post any links here, as there is a lot of information on the web.

Damon McKinlay
May 2015
Powered by