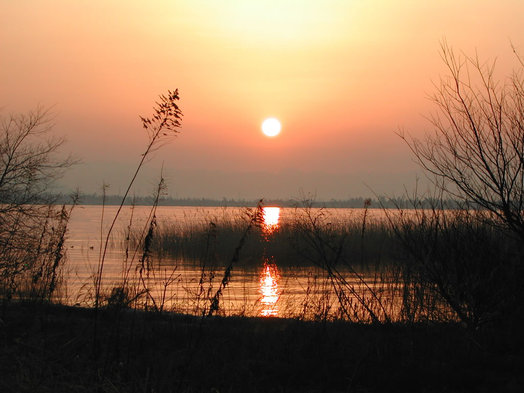 December in Kansai has been rather disappointing this year, the most remarkable feature of the month being that for the first three weeks there was no suggestion of seasonal change. There were still many resplendantly autumnal maples until late into the third week, by which time even the modest hills around Kyoto can usually be expected to have experienced their first transient dusting of snow. It wasn't until Christmas Day that there was a widespread frost and not until the last day of the year did the first snow finally fall. The following is a very subjective view of the month:

While a number of Little Grebes in breeding plumage on the 25th at Lake Biwa wasn't exceptional (I have even seen downy young in December in Kyoto) a breeding-plumaged Black-necked Grebe was a surprise. There were 175-200 Taiga Bean Geese and c. 80 Tundra Swans there on the same date. My feeling was that dabbling duck numbers were rather low compared to last early winter; relatively few Eurasian Wigeon were present and no Falcated Ducks or Northern Pintail were seen. Diving ducks, on the other hand,were well represented; Smew in particular were plentiful, with a tightly packed group of 30 being the largest concentration. I have not heard whether any White-tailed Eagles or Steller's Sea Eagles have arrived yet this winter, but a Long-billed Murrelet present on at least the 23rd was probably the lake's star bird of the month. Unfortunately it didn't linger till my visit and I had to settle for a flock of 30-40 Barn Swallows as an unexpected Christmas stocking filler. The majority of them had missing primaries, suggesting active moult; so presumably these birds will be wintering in Japan, though perhaps not this far north when the weather eventually does become more fitting for the time of year.

Eurasian Wigeon numbers also seemed low along the Yodogawa in Osaka, though, unlike at Biwa-ko, Northern Pintail numbers were typical, with about 100+ in the area I usually visit. Gabor told me of 2 Long-billed Dowitchers and 2 Black-winged Stilts near the mouth of the river on the 26th, both of which—especially the dowitchers—are good for this area. He also mentioned that there was a Saunders's Gull in south Osaka early in the month. On the Yodogawa in the city, there have been at least 6 different Yellow-legged (Mongolian) Gulls (L. (cachinnans) mongolicus) during the month; two or three can usually be seen on each visit to the area. An adult taimyrensis was seen on the 22nd, and then a 1st calendar-year and possible 2nd calendar-year taimyrensis on the 23rd. There was also a distant tantalizingly Thayer's-like adult on the 22nd: that would have been my bird-of-the-month had I been able to confirm it.

Birding around Kyoto has been unexciting. Early in the month there seemed to be a big build-up of Brown-eared Bulbuls along the rivers south of town. But the absentees are more noteworthy, and despite seeing c. 150 Rooks in one area early in the month, a visit to Ogura on the 28th was the first time I have ever failed to see them there; there were no accompanying Daurian Jackdaws either, of course. Very few ducks were on the rivers locally, and no harriers, Grey-cheeked [? — ed.] or Japanese Reed Buntings; although I did not see any of the latter at all last winter, there were always a small number present in previous years. The only positives were a Cattle Egret following a plough on the 28th, a high count of 103 White 'leugens' Wagtails, and the Oriental Stork was still present until at least mid-month.