This peninsula in the southwest of Hokkaido is not especially well known for birdwatching; northern and eastern Hokkaido attract most of the birders coming this far north. However, Oshima has many of the same species, even though it lacks most of the higher altitude species, and there is a noticeable lack of wetland habitat, so that several of the more famous Hokkaido specialties are absent. It is also interesting and scenic enough to warrant an occasional visit from birders based farther south. The area is fairly hilly and heavily forested, and is full of birds. The coast is mainly rocky, with a few small beaches and generally tiny rivers. Numerous fishing boat harbours and breakwaters are worth checking out in winter for wildfowl and other seabirds, and the forests are best in late winter to early summer. There is also a fairly sizeable lake in the area, Lake Onuma. 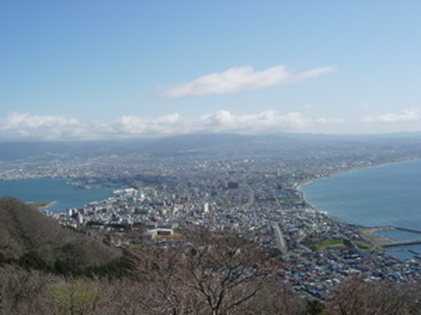 I have lived in Hakodate since late 1999, and have seen over 150 species in the town. It is probably the closest point in Hokkaido to Honshu, so it is particularly interesting at migration time—migrants occur even in the centre of town or as flyovers.  The dominant feature of Hakodate is Hakodate-yama, a small forest-covered mountain connected to the mainland by a spit. If you pass through Hakodate, it is well worth a visit at any season except high summer (unless you like mosquitoes, hoards of tourists and not many birds) and winter (when the trails up the mountain are blocked by snow). The best trail leads from Tachi-Machi Misaki, a well-known viewpoint looking out over the Tsugaru Straits (and incidentally, a popular spot for suicides). Seawatching can be productive here, especially in late winter and early spring. Many sea ducks, alcids, loons and grebes feed close to the cape, and in mid-May you can watch the Red-necked Phalarope passage: hundreds of thousand of these birds pass offshore (though the best places to see them close inshore are farther east on R278 towards Esan). 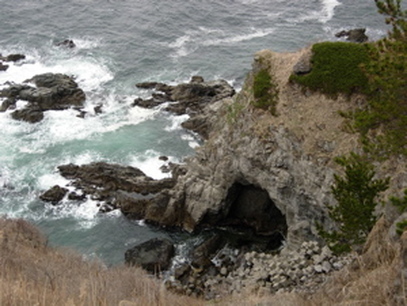 View down the cape side (Stuart Price)
From the car park on the cape, follow the road up the mountain about two hundred metres, and you will see a trail signposted up the mountain. It is a fairly relaxing walk through mature mixed forest. All the usual woodland species are here: six species of tit, four species of woodpeckers, and in spring you can see all the common migrant warblers, thrushes, chats, buntings and cuckoos. Late April through early May is generally the best time. There are some very nice views from the top, and you can choose a variety of trails to descend (or a cable car if you are feeling lazy). Tachi-machi Misaki can be reached by the #2 Tram to Yachigashira. The cape is signposted from the tram's terminus. Near the tram stop is a small fishing harbour, where you can see Brant Goose and Glaucous-winged Gull in winter, and occasionally alcids sheltering from storms. Autumn also brings the raptor migration (mainly accipters and Common Buzzard), but this is best observed farther west along R228 at Matsumae.
There are a couple of other sites worth seeing if you are in town for more than a day. Right in the centre of town, Goryokaku-koen is an only moderately interesting tourist attraction, but the park is pretty good in the migration season and you can often find migrants skulking around in the trees and bushes. I have seen Siberian Rubythroat, Wryneck, seven species of warblers and five species of flycatchers here, although it can get pretty crowded, especially at weekends. The moat often holds wildfowl; I have seen Smew here in autumn. Late winter often sees large numbers of finches passing through, and in some years there are large tame flocks of Red Crossbill.

Yunokawa Onsen is a hot spring resort in the eastern part of the city and has the best hotels in town. It is at the terminus of both the #2 and #5 tram lines. The river here is worth a look in spring and summer, when there are singing Oriental and Black-browed Reed Warblers and Gray's Grasshopper Warbler, as well as Siberian Stonechat, Japanese Thrush and Chestnut-eared Bunting. I have even seen a Hoopoe on the sports fields opposite the Daiei department store here. In winter, there are various raptors and also Brown Dipper and all three common species of wagtails. Yunokawa is also a good place to watch the Red-necked Phalarope migration in May. 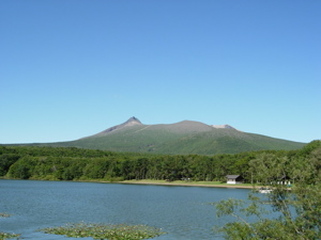 By automobile, this lake is about 30 minutes north of Hakodate along R5. The area around Onuma is nice enough to justify a weekend away from the concrete jungles of Honshu. An active volcano, Mt. Komagadake towers over the lake and forests of this Quasi-National Park. The forests are full of birds in spring and summer. Specialties of the area include Black Woodpecker, Hazel Grouse, and Ruddy Kingfisher. All the usual woodland species are here in some abundance. There are lots of trails in the forest, and it is easy to walk or cycle around the lake, stopping to bird at any likely-looking spots. The campsite on the eastern side of the lake is good for woodpeckers and flycatchers. 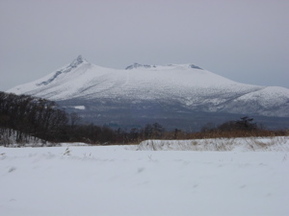 Large numbers of wildfowl pass through in spring when the ice finally melts and the lake becomes open again. Some hotsprings keep parts of the lake ice-free in winter, and there is a fairly sizeable flock of Whooper Swan present. Onuma is easily accessible by bus and train from Hakodate and there are numerous hotels dotted around the lake and in Onuma Village itself.
3. Yurappu River, Yakumo

Yakumo is an hour or so away from Hakodate by car. The river here is a great place in winter to see Steller's Sea Eagle, and the mouth of the river is the only decent place for waders in the southwest of Hokkaido. In winter there are fairly good numbers of Steller's Sea and White-tailed Eagles on the river, which is one of several major salmon runs in the area. They are easy to see.

Just take R5 north from Hakodate and cross the Yurrapu River, and then proceed west toward Imagane on R277. About 5 km inland, you will come to a junction. Turn right onto R42 and follow the river, where there are numerous places to watch the eagles. The river valley also holds many of the common species you would expect: Brown Dipper, Goosander, all three wagtails, etc. Other raptors are also common in the area in winter. The mouth of the river is a good place to see waders in spring and autumn. There is not much suitable habitat for shorebirds in Oshima, but the Yurappu has smallish mudflats at its mouth. As well as the commoner waders, I have seen Black-winged Stilt here, and the river is also good for wildfowl and herons, including surprisingly high numbers of Great Egret, in autumn. Just south of the river mouth, you can see huge rafts of the commoner sea ducks very close inshore. Large numbers of gulls of eight species congregate around the seafood processing businesses just a few hundred yards south of the river mouth.