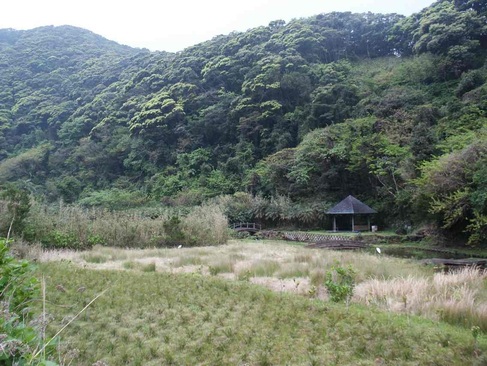 Hachijo-jima is the southernmost of the Izu Islands, located south of Tokyo and within its political district. Hachijo Island hosts the endemics associated with this chain—Izu Thrush and Ijima's Leaf-Warbler (an endemic breeder from early April to late September)—and a couple of endemic subspecies (Varied Tit and Japanese Robin).

Hachijo became the prime spot to see these endemics after the Miyake-jima volcanic eruption of July 2000, and while Miyake-jima has been opened up again to the public (as of May 2005), gas continues to be discharged from the crater and gas masks are currently required for designated areas (the risk of further eruptions is considered low at present). This, coupled with the extended opportunity for sea watching from the significantly longer ferry trip, continues to make Hachijo an attractive option.

The birding: Hotaru Suiro is considered one of the prime birding spots on the island, where it is possible to pick up all of the above-mentioned species. Additionally, Japanese Wood-Pigeon, Chinese Bamboo-Partridge, Little Cuckoo (late April through September), Japanese Bush-Warbler, and Scaly Thrush are common in the area. Hotaru Suiro is located in the middle of the island. To get there, follow the river just south of the ferry dock (Sokodo Port). The northern and western slopes of Mt. Mihara (the southern of the island's two main 'mountains') also offer good birding.

From the ferry: The birding from the ferry can be quite good. Black-footed, Laysan, and Short-tailed Albatrosses, Northern Fulmar; Bulwer's and Bonin Petrels, Streaked, Wedge-tailed, Sooty, and Short-tailed Shearwaters, Tristam's and Swinhoe's Storm-Petrels, Brown Booby, Japanese Cormorant, South Polar Skua, Pomarine, Parasitic, and Long-tailed Jaegers, and Japanese and Ancient Murrelets are all possible at different times of the year.

Getting there: The Tokai Kisen Ferry Company provides service from Tokyo, making stops at MIYAKEJIMA, Mikura, and Hachijo Islands. Reservations can be made at (03) 5472-9999 (in Japanese, though staff may be able to handle some clear and simple English). To get to the ferry, take the Yamanote Line to Hamamatsu-cho Station. Follow the signs towards the Takeshiba-sanbashi (pier). As you exit the station, turn right. The pier is straight ahead and a 10- to 15-minute walk. The Tokai Kisen building is on the right of the circular courtyard with a giant mast in the center. The ferry leaves at 22:30.  Additionally, there are flights available. Call Air Nippon (0120-029-222) for information.

Rentals: Car and bicycle hire are both possible. Ask at the desk in the ferry building lobby at the port on Hachijo.

The Sagami River arches around the eastern flanks of the Tanzawa Mountains in southwestern Kanagawa and empties into Sagami Bay at Hiratsuka. It is a large river with a broad, artificially constructed basin that hosts multi-use activities, from kite-flying to dirt-biking, and can be busy on weekends and holidays; but quiet stretches do occur. The middle and lower river parallels the JR Sagami Line (running from Hachioji in the north to Chigasaki in the south), so that it can be reached by foot from several stations.

I usually disembark at Sobudaishita Station and spend several hours walking the river bank north to Harataima (the second station northward) and then cutting eastward another 30 minutes to Sagami Pond (Sagamihara Chosuichi), a municipal reservoir for the city of Sagamihara. It is a long day's journey on foot.

Ricefields in autumn at Sobudaishita (C. Harper)
From the lone Sobudaishita exit, the river will be behind you, though well out of sight beyond the rice fields. Leave the station, turn left and walk down to the first leftward access; turn left again there and work your way approximately straight down to the river. These rice fields have seen better days, as many of them have now been filled in for truck gardening. Over the years, though, they have produced Striated Heron, Grey-headed Lapwing, Painted Snipe, Oriental Pratincole, and Long-toed and Temminck's Stint, so the fields are well worth meandering among on your way to the river.
Eventually, you will come to the bordering road, a shrubbed or treed, somewhat landscaped, margin, and then the eastern bank of the Sagami River. On the other side of the river are more (and vaster) rice fields, reached from the high Zakaibashi bridge to your left, but they are assiduously fumigated in season, and have produced little of interest for me, beyond a Green Sandpiper once upon a time. Turn right along the river bank and work your way northward. You will find that you have to leave the river at a couple of places and use the road which parallels it (Hy 46, the Sagamihara-Chigasaki Sen), or intervening paddy roads, but you can get back down to the river again at various points.

About midway along this stretch of the river is a dam or overflow, behind which deeper water makes good habitat for wintering ducks, including Falcated Duck and the occasional Baikal Teal, Common Goldeneye or Smew. In fall, young Striated Herons make their way down from the upper reaches of the river to line up with the other egrets along the overflow. 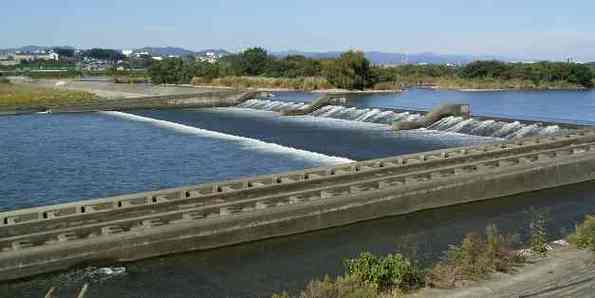 Sagami River dam
Along the river are weed patches that harbour Common Reed Buntings, Rustic Buntings and thrushes (including the occasional White's Thrush) in the winter, and the riverside hosts Japanese Wagtails in abundance. Islets provide habitat for Long-billed Plovers, though many of these gravel bars appear and disappear as the engineers change the water level or steam-shovel the riverbed. In migration, I get cuckoos, Red-cheeked Starlings, Stejneger's Stonechats, raptors, and other surprises from time to time—like a pair of fishing Peregrines.

When you reach the next bridge up the river, the Showabashi, over which Highway 52 passes, leave the river and take that highway to the right (east). If you have met Hy 52 at the river, be sure to turn right with it at Shimotoma intersection; if you have met Hy 52 from Hy 41 farther east at Asamizosho Shogakko Iriguchi (Asamizo Elementary School Entrance), just turn right. Go straight ahead; follow Hy 52 eastward past Harataima Station and onward. The main road will eventually curve uphill and to the right, and near the crest will be a junction called Shibakogahara rikkyo, which serves as an entrance to Sagamihara Koen on the right. This park is of little interest, so continue straight at the junction, and you will soon see a high raised embankment looming on your left, at about the same time you can actually see into the park on your right. Climbing that embankment (there's a paved ramp) will reveal Sagami Pond.

Sagami Pond in summer: no ducks now, sorry
Sagami Pond is wonderful for wintering ducks, especially if you are a photographer. The reservoir is entirely barred off, and two of its four sides are inaccessible to the public, but viewing is still close and easy: the birds are relatively unalarmed by your presence. Rarities cannot be relied upon, of course, but Mandarin Duck and Falcated Duck are regular (though varying in numbers—for the past couple of years there have been about 200 Mandarins), along with all the common species. Patience usually rewards me with an American Wigeon—or at least a hybrid—among the Eurasian Wigeons. Occasional winters see Baikal Teal, and a rare Garganey may stop by in late summer or early autumn.

There is a narrow treed margin around the outside of the reservoir, and keeping half an eye on them should turn up a flock of Azure-winged Magpies, a Hawfinch, or wintering buntings.
Charles Harper (November 2005) 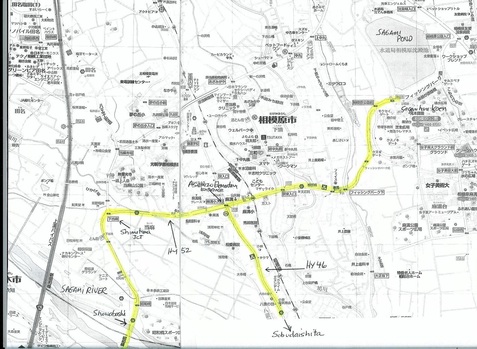 Road map from Sagami River to Sagami Pond
Powered by